Back in the Game Again By Tom Peckitt 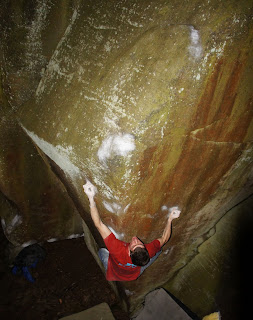 Having been on a climbing hiatus for about 6 months whilst living in Cheltenham, I've now moved back to Leeds. I can safely say it feels like home up here, even though I'm a southern fairy. I feel like a northerner now. Ensuring regular intakes of premium ale, eating plenty of pies and using this crazy northern lingo.

Whilst living in Cheltenham I made the occasional trip to Leeds to see friends and touch grit again. I used these sporadic trips to clean a few projects and get them done. The first two are at Brimham and prime lines, I'd dare to say as good as any at Brimham, especially the incredible prow of "Take a Bough". To see more details, photos and videos of these check out UKClimbing.com

The next project which I turned my attention is something I spotted when I went to the newly developed Norwood Edge just below Hunter's Stones. Archimedes (7c+) takes an obvious line up a hanging flake and virtualy blank wall. The only hold on the wall is a perfectly circular crimp. Have a look at the video below but, again, there are more details on UKC.


However, the piece de resistance is the stunning arete project in the woods of the font-esque West Chevin, not far from Caley. I stumbled across this line sometime ago after some locals had done a few other problems in the area. I was gobsmacked that this line hadn't been done, although I am sure it had been tried for quite some years as it was fully brushed. I didn't get round to trying it until recently but took advantage of a huge torch/floodlight which my friend bought recently and went for a lamping session.

Fluid Dynamics (pictured above) involves a stiff pull from two undercuts to a poor crimpy rail. This is followed by a very difficult move to remove your heel from a good shelf and taking the subsequent barn door. If this move is held, a delicate foot swap and left toe round the corner (onto a terribly bad toe hook) set you up for the 8a moves which follow. Use the toe hook to gain a pathetic crimp fairly high up then cut lose and bring your foot onto the shelf. The crux is probably the top move where a dynamic latch is required to a very slopey guppy with your right hand and a very quick match with your left hand to an almost useless sloper.

Without trying to be controversial, I think this is one of the best lines in the whole area, of which there are many. It's equally as good as Zoo York and certainly harder. Hopefully, future repeatists will confirm this.

It's great to be back in the game again and in the place I love to be. To be rewarded with some problems like these makes for a very warm welcome back.
Posted by Climber Blogs at 09:31