Apparently this is the height of British summer. Well, if that's true, hard grit bouldering should be out of the question. We all know how unpredictable this temperate climate is. Obviously, rubbish and crap for climbing. The point is, to climb hard grit, you need to seize every opportunity mother nature throws at you.

When I set off for Simon's Seat yesterday, things didn't look promising. The air was laden with moisture and the clouds threatened to unleash their fury. Fortunately, they didn't. Not much anyway.

After an arduous, sweaty walk and being pursued by a keen collection of flies, we breached through the bracken and woods on to the moorland. We were greeted by a fresh breeze. We laid our hands on the rock. I was amazed. The thick cloud cover, cool breeze and maybe some wishful thinking had given us near perfect grit conditions in summer time.

I had gone to try an old project, which has been known of for some time and thwarted the attempts of many strong climbers. I had already sussed a sequence so it was a matter of dragging my skinny arse from the bottom of the rock to the top in one go.....that is what climbing is apparently.

The problem tackles an overhanging gritstone wall topped with a hat like roof. To start, pinch the obvious rail feature and sink your fingers into the undercut pocket. Throw your toe far out left in a sort of foot dyno-esque move. I match my feet in order to get the left toe hook in just the right place. Now lunge to a distant finger slot at pretty much full span. Up and right of this slot is a poor pocket in the roof, which has the appearance of being drilled (it’s not). From full span, a very difficult dyno type move is required to latch this pocket. Ultimate precision is needed to joust your fingers in correctly. These start moves are the crux. Once you have the slot and pocket an enjoyable but droppable top out ensues.

I reckon the name Toe-Fu fits pretty well. It’s not because I’m a veggie and love bean curd but due to the toe hook fling resembling a form of climbing martial art. As for the grade, I’m not sure. It sits in the 8’s somewhere and probably depends slightly on your physique. Even if you are very tall it’ll still be hard. I still had some slack in my arm span so it’s certainly possible for people a fair bit shorter than me. I thought I may give this 8b but, as usual, it felt easier when it was dispatched.

I’m delighted with this addition to Simon’s Seat. It’s a true gem in the crown of British bouldering. To have done such a problem in summer when hard grit is apparently off limits is a true rarity. Seems like global warming is taking a while to reach us!

Here’s a sequence of pics to demonstrate the moves: 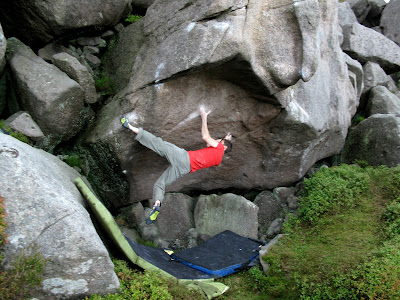 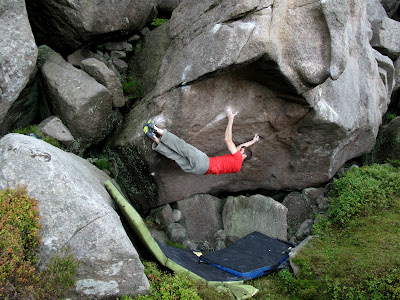 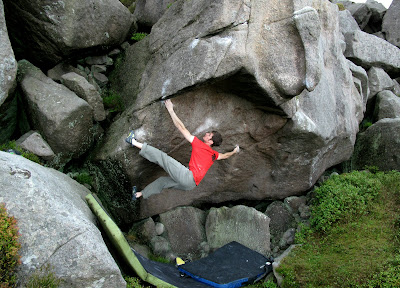 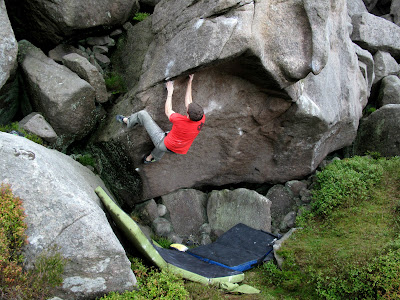 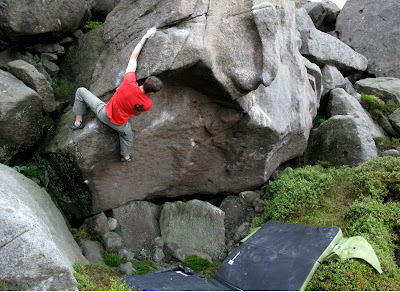 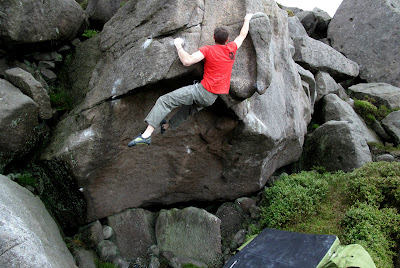 Another highlight of the day, aside from Will Buck repeating a cool problem called Spondonical (7b), was a few insanely low fly-overs by a military helicopter. In fact, it flew so close with the door open on one occasion that we could see a couple of them watching us climb. The following vid can’t really describe how close they were and how bloody loud it was! It was the third time they had passed by and this time it hovered for ages. I have never seen anything like it in all my years of climbing. Yes, I’ve seen low flying jets and helicopters weaving through valleys but none that come into such proximity to us. Astonishing!