Climbing is back on!

It’s been a long time since my last blog but lots of non-climbing stuff has been going on. It’s been hard to dedicate much time to climbing over the last six months but a gradual return to form is coming to fruition – just as we are losing those grit conditions! A new job and a new house have been a time consuming distraction. Despite this, finding the time to get out occasionally is essential to my survival.

Matt Birch and I had a couple of trips up to Flasby Fell earlier this year to try an almost legendary problem called Rhythm. The Lone Boulder at Flasby is a staggering chunk of grit and home to some exceptional problems. On my first trip to Flasby we bumped into Tom Newbury and Paul Craven. We bumbled around having a crack a various things...and generally having a good crack. I was fortunate to dispatch a tough two move wonder, called Durham Edition fairly swiftly (after some good foot beta from Tom). Matt and I chipped away at Rhythm but the unseasonably warm day thwarted our efforts to grip the crystally holds, quickly wearing down our skin. Rhythm requires a breezy, cool day to make maximum use of the holds. We had to bide out time and wait.

Another trip up, this time in gale force winds, we could barely stand. As soon as we attempted to climb numbness overcome our extremities instantly. Another 45 minute drive and long walk with pads for no reward. Matt left for the States and I was left looking for a “working buddy”. Luck would have it that a spritely little fellow called Dave Jones has moved to town and joined me for a session with bountiful enthusiasm. This time I made a lot of headway, working out the subtle nuances which may enable me to reach the top. However, after only several good goes, my finger tips started to deteriorate. We made a trip up a couple of week later but as soon as I stepped out the car a dump of snow decided to hinder my efforts.

On my last trip, we bumped into Mark Katz and Pat from the Depot (also known as Bystander Films). Pat had an immense amount of camera kit, weighing 16kg, including one of those crane-things. He shot and edited an awesome clip of our attempts. I came achingly close as you’ll see.

So, after about five visits to Flasby, only two had remotely “sendable” conditions. I found this incredibly frustrating. Climbing hard grit problems is more than just being physically able to climb them. Everything has to fit. Sometimes this happens quickly; sometimes you have to be patient. One thing is for sure, if you keep chipping away you’ll eventually reap the rewards. However, now that the conditions are difficult to find (and I work 9-5) who knows when I can get back to finish it.

I’m not an indoor climber but I’ve been trying to get to City Bloc in Leeds twice a week to keep ticking over. Their problems are superb and suitably entertaining. With the addition of a new training board it really is a quality venue. A climbers climbing wall, run by climbers for climbers (try saying that fast!).

I’ve even had time to start looking at my project list again. I’ve been close to an exceptional and hard line at Simon’s Seat but not been back recently. Watch this space for that one.

Last weekend I went to Brimham with one thing in mind; abbing down an old highball project I had seen years ago. Brimham has to be one of the most extensive crags in the country. There is just so much there...and loads still to do.

The project is in the Lover’s Leap area and tackles a huge nose of grit via some slapping on slopers. It starts stepping off a boulder, from a decent height already, with the meat of the problem high up. The landing drops away down a gully too, so falling is best avoided really. I spent about an hour brushing the holds and working the moves on my own, one by one. When the rest of the group came to join me, I top roped the line and sent it first go. Enthused, we padded out the landing (poorly) and a couple of attentive spotters came forward (thanks Tom and Ru). I set off knowing that I could climb it with relative ease so falling was never in my mind. This is pretty unusual as I never work things on a rope and therefore never really sure how these things will be.

I have to say, it may not be my hardest first ascent but it is up there with one of my finest. The climbing is superb and the line is gob-smacking. The vid and pic below don’t do it justice so if you can check out “One Love” (7b+) for yourself..... 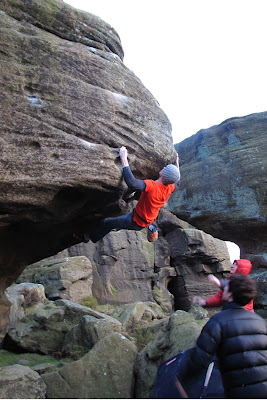 The final adventure to note was a trip to Hepburn in Northumberland yesterday. I had heard a lot about two problems on one boulder: Northern Soul and Preparation H. These have to be two of the best problems I have seen anywhere; absolutely stunning and very reminiscent of Font. I worked my way round the crag, enjoying every second. Northern Soul certainly got my heart pounding, with the tentative top moves really sending a chill but rush of excitement through me. My girlfriend’s Dad gave it a good crack too but the unhelpful, rounded top holds unfortunately spat him off the top move. He’ll get it next time for sure, not bad for 56! 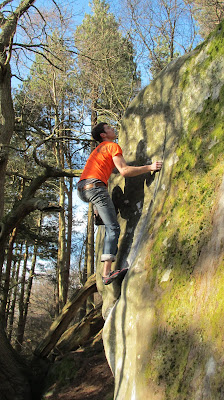 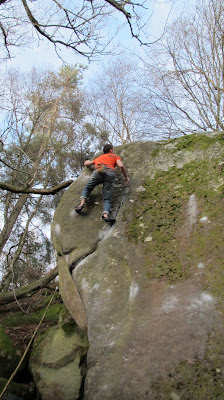 So, that's a bit about what's been going on. There's been plenty in between but these were a few highlights. As for the coming months, I’ve got lots of projects and many problems to do.......

Oh, I can’t forget Charlotte’s recent send of High Noon at Caley, which she did in calm and smooth style. We have a vid and pics of those but she’ll post something up soon. Peace out.